Hide Search
You are here: Home / The Latest With Chey / Cheysuli Sheds Pounds 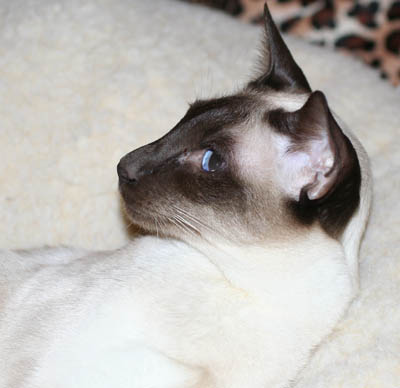 After receiving a furminator, Cheysuli reported shed pounds of fur. The former presidential candidate is said to have stepped on the scale with high hopes. Finding that she had not lost a single ounce, she was forced to confront herself in a mirror.

“You know, it was sort of bad before but now she really looks silly,” said one insider.

“You can’t hide the football like look without any fur,” said another. In fact, rumors abound that the humans around Cheysuli tried to induce vomiting in hope that she actually HAD swallowed a football at a wild superbowl party. Unfortunately, Cheysuli vomited up nothing more than a bit of food.

Cheysuli is said to be hoping that a coat made from the shed fur of Gemini can cover up some of her pounds.

“You know, weight is the main reason they make clothing. Why would anyone buy it but to hide those few unwanted inches here and there? A good fashion sense can cover a multitude of sins.”

Sources close to Cheysuli say she’s going to need someone particularly gifted in fashion sense to help out. “I mean even Daisy the Curly Cat is likely to have trouble disguising that football she appears to have swallowed.”