Hide Search
You are here: Home / The Latest With Chey / Meezer Monday Looking Back 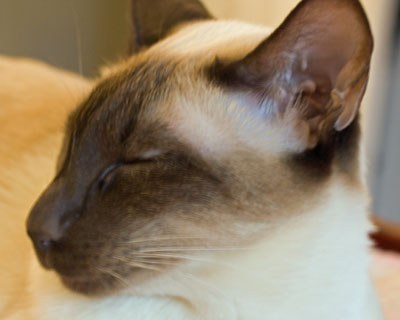 I announced my presidential candidacy back in the early spring of 2006. Later on I choose Derby as a running mate (that fall I think).

In July of that same year cats were writing songs, so I went whole hog as they say and wrote a musical, which could only star Miles Meezer.

I won the Miss Litterbox contest and then spoke out about the scandal of the Mr. Litterbox.

In February of 2007, Latte proposed and we were married on May 5, 2007. With help from Sanjee’s human and of course Latte’s human we had the first cat blogosphere wedding. I like to think we started a trend. We adopted the lovely little Tara Princess Meezer.

Later that summer Gemini decided to explore the wide world and we were supported by so many in the blogosphere while the Woman stressed herself out. Gemini came back at 2 AM the following morning.

My presidential campaign was wracked by scandals. I was linked to Tony Soprano, the reporter went missing after being whapped, Daisy was captured because she knew who did it but wouldn’t talk and finally the full story came out, half truths and scandals abounding. I love the catstra nostra! Before that I was assimilated by the Borg and humans had problems with that, fearing that I would follow the crowd (hello–pot/kettle?). In spite of that I went into election day with polls showing my numbers in the thirties at least! I was certain to win, only to find that you are not allowed to vote for a cat. Since that time, I have been at loose ends trying to figure out what to do.

Some of my favorite posts over that time included the newsy/informative posts on Prostrate Cancer, (I really should have left the comment on there from someone yelling at me for being stupid and that prostrate cancer was very serious for men because the prostrate is an organ they have that is akin to the uterus. I hate to break it to him, but it’s not. The organ he thinks he’s referring to is the prostate… prostrate cancer is something different…) and potential niche blog sites.

My favorite political posts included being Ashamed of Seattle and the Poot Post.