Hide Search
You are here: Home / The Latest With Chey / Gemini Airs Opinions on Global Warming 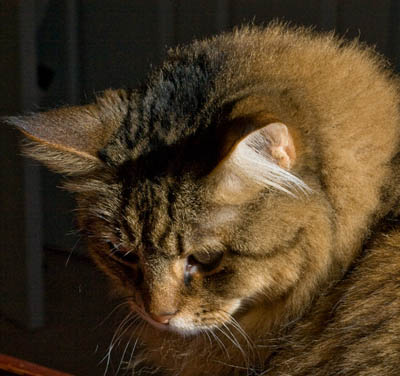 I don’t understand this weather thing. I sit inside and sometimes it is sunny and nice and sometimes not so nice and sometimes there is white stuff on the ground. Momma often tries to get me outside then because she wants to watch me walk on it, but I am very smart. I do not go because I do not like to get my toes wet at all.

I don’t understand why Momma won’t ski. First there was no snow. Then there was too much snow. I would think that if they needed snow they would want more of it? But no. They closed the area she skis at because of too much snow–well at least the way in. And then they had rain and everything fell down. They even had a mudslide in one part of the ski area where she skis and it damaged the lodge there and a couple of cabins.

Then she went up last week but it was kind of icy and foggy and she met the Horse named Charley. I think she should have met Snap. Anyway the following Friday it was so warm they had to make snow (I wonder how they do that?) and so it wasn’t all that nice and now tomorrow she isn’t sure if she’ll go up because it will snow again and she is worried at the amounts that she might not be able to get home.

I hope she doesn’t go if she might not come right home! I don’t like being without my Momma!