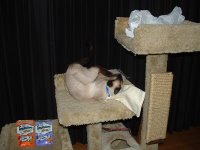 Most kitties seemed to understand that it was an Orthodox Church from the cross. Many thought it was Alaska for varying reasons as well. Yes, all it is Sarah Palin country but not all that close to where she lives, so I did not need to worry about low flying helicopters.

Now I have to speak to Isis about this comment:

Chey stop flattening that poor building and come over to Miss Peach’s for a tea party today! There’s a big celebration and I have shrimp puffs!

You see as my new nickname is Chunky Chey-tocks I am not sure I like the idea that you think I am flattening out that church. I might become obsessed with my weight and become anorexic or better yet bulemic (we cats are better at that than humans). In fact the latter would allow me to eat more and make more messes… hmmm?!

At any rate, thanks to Miss Peach and her family for sending us some more wonderful photos so that I can go wandering again! For those cats who are tired of never knowing where I am, send me something from your part of the world!