Hide Search
You are here: Home / The Latest With Chey / Memory Meezer Monday 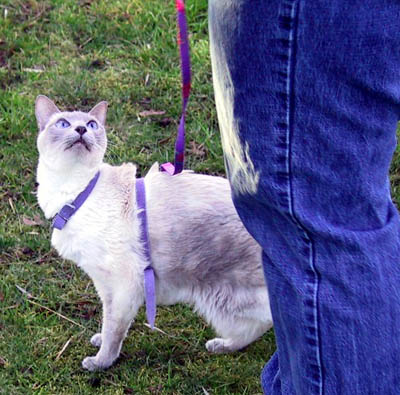 We lost so many friends last week that we thought today would be a good day to honor the Siamese who came before, Simone.

The Woman had just lost another cat to an unusual disease. She was working at the vet and saw these big old 20 plus year old Siamese mix males and she wanted a cat like that. So she started talking to clients. One called with a Siamese rescue. It turned out to be Simone.

Simone was nothing like those big males. She was a petite little Siamese and probably a blue or lilac point. She was certainly not show quality but had probably been a purebred pet quality cat. The people who brought her in had driven about an hour and the Woman hated to send them back so she took Simone even though she wasn’t the cat she had hoped for.

The first day Simone hid under the bed, not being sure about the Iggy cat. However, late in the night, the Woman woke up and Simone was curled in a tight little ball on the far side of the bed. The Woman said, “Well Hello.” Simone woke up and came over and immediately settled down on the Woman’s arm. From that night on, she always slept on the Woman.

She was a six year old cat when she came to the Woman and she was about 16 when she died of liver failure. She walked on a leash. She played fetch. She loved to play chase with the Woman. She would chase the Iggy Cat sometimes. When she and Iggy lived alone with the Woman, Iggy had to go to the vet and stay overnight. Simone was inconsolable. When Ig came home, she smelled him once, swatted him across the face and turned away to wander away. Ig looked annoyed.

Simone and Georgia only ever tolerated each other but they got along okay so long as Georgia could go outside.

Simone had acted weird for about six months before she died. She and the Woman had visited the vet many times but they never knew what was wrong. They started making the Woman feel she and Simone were neurotic. A week after Iggy died, Simone was bright yellow. She died from liver failure (helped to bridge) just ten days after Iggy died, following her beloved orange cat to the Bridge.

The Woman was terribly upset because she felt she had failed Simone in not getting her the help she needed. Liver failure is very painful and Simone has suffered stoicly. We think Iggy heard her and sent Gemini to take her mind of that. About five months later, I, Cheysuli, was offered for adoption and the Woman drove 300 miles to go and pick me up for the cost of my spay. And the rest is history. I guess I do need to thank Simone for being such a cuddle muffin that the Woman had to have another Siamese.