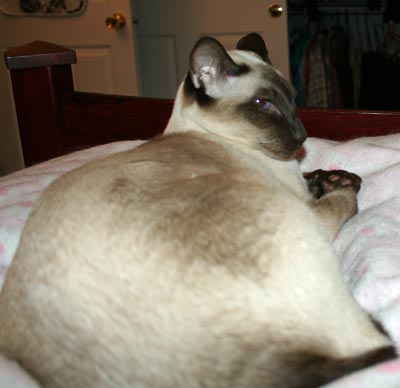 My Meezer Rule: Always check out your business prospects thoroughly.

Presidential Candidate Cheysuli is being investigated following opening a nap coaching business. While coaches are not strictly licensed through the states, Cheysuli failed to file a business license with the state of Washington for her business.

“There will be a formal investigation,” stated one unnamed source in Olympia. “While she has yet to earn any money from this, she has opened a business and advertised without obtaining a business licenses. Fines rub in the hundreds of dollars for this and then there is the issue of back taxes. However, if she really hasn’t earned anything, and we will be checking carefully, she won’t owe anything except the fines.”

Cats in Washington are outraged claiming that Cheysuli has been singled out because of her high profile. “How many other businesses are out there doing business, earning less than $600 a year and aren’t required to have a license?” stated one cat.

Cheysuli was not available for comment. Rumor has it she continues to practice up on her napping for nap coaching.