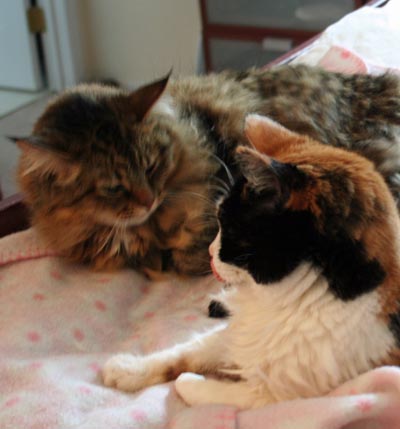 Momma was reading about those kitties who had gone before and she started thinking that it has been a really long time since she wrote about Georgia’s history, if at all. So I said I would let that be my Tabby Tuesday post, so long as I got to be in the photo too! I know how people love to look at my soft floofy furs.

Anyway, Georgia met Momma when Momma first moved into a cheap apartment in Vancouver. Georgia lived on the grounds some where. Momma isn’t sure when she first started noticing her but over time, she came to look forward to this lovely calico cat that would greet her upon driving into her parking space. She would bend down and rub her ears and pet her a bit and then go on about her business. She would worry that some day she would see this calico run over on the street but it never happened.

After at least a year, another woman who lived in the building came by and told Momma that she was moving. She had been putting out food and water for Georgia (who she called George) and had a box outside the front door for her to snuggle in with a blanket. She asked that Momma take it and do the same. This Woman’s cats wouldn’t allow Georgia inside. Momma’s big Iggy Cat (who led me to her) wouldn’t let Georgia inside either.

Momma knew that this lovely calico cat was a girl so she didn’t want to call her George. So she called her Georgie Girl and then eventually Georgia became a more femine shorter name and is her official name at the vet.

In the winter of 1996/1997 there was a huge wind storm. Momma remembers that the day of the windstorm before it really started, Georgia just pushed her way in the apartment past the Iggy Cat and ate some of his food (as he looked on) and then parked herself in the closet and slept. Iggy ignored her. She slept all day of the storm and then most of the night after the storm was mostly past. Lots of big trees were uprooted and toppled around and the power was out for large portions of the city during the day. The Cemetery where Momma was working lost two really large old trees and one was sort of covering the plot that was going to be used for a funeral the following day.

Anyway at 4 Am or so Georgia woke up and had to go out. I guess she did not know about litter boxes. Anyway Momma let her out. The next day, when Georgia wanted to come back in, Momma decided that if she really wanted to be an inside cat then she needed to go to the vet and get her vaccines. So Momma crated her up and Georgia, who usually has a nice little squeak suddenly howled.

Well she was healthy, got her vaccines and Momma was told the notch in her ear was probably because she was a feral cat and had been spayed at a low cost feral cat spay. Momma took her home and started trying to keep her inside. Georgia didn’t really like this.

Momma also learned, talking to people who would ask her about Georgia and if she had seen her because they hadn’t that five other people in the complex were feeding her and had beds for her too. One called her Squeaker because of her tiny voice. They had obviously never taken her to the vet.

Anyway, Georgia would pick on the Siamese who came before Cheysuli and so Momma would let her out so she could go pick on other cats. Georgia once chased a little half grown kitten to the top of a tree and then sat at the bottom for awhile so the kitten couldn’t come down. She was very bossy.

When Momma moved, she took Georgia with her. In the first house, Georgia really liked the outside and ran the neighborhood much like she ran the apartment complex. She brought Momma a couple of her kills. One was a bird. Momma said she was so proud of herself her eyes looked like they were rolling in circles. She couldn’t be mad at her even though she felt bad for the bird. She had even put a bell on Georgia’s collar. Another time she found a wild baby bunny at the doorstep and she was very sad about that too.

When they moved again, Georgia didn’t like the outside so much. They were in a condo this time and it was a bit busier. Also there was a big retriever who would run by our condo and use the lawn. Georgia did not like dogs so I suspect that she worried about this. Also Momma didn’t like that the dog was not on a leash. So Georgia would mostly just go out with Momma when she read or when she walked with Ig or Simone around the complex.

Then Iggy died and 10 days later Simone followed him. The day after Simone died, Momma found me! Georgia did not want another cat but Momma told her that that was not an option and she had to be nice to me.

However, one time Momma stepped on the edge of my floofy tail furs and I SCREATCHED because it sort of hurt and Georgia came running. I ran to Georgia and Georgia glared at Momma. Georgia sniffed me and I was okay so she swatted me and left but not before glaring hard at Momma for hurting me.

I always run to Georgia when I have a choice between her and Momma. I have never stopped trying to fight with her even though she cannot really fight.

Shortly after we moved up here, Georgia was diagnosed with a menigioma which is a brain tumor. Momma started working with a homeopathic vet rather than doing Pred to make her comfortable. Georgia had about 6 months on the outside, according to the regular vet. Georgia is still with us, over two years later. The homeopathic vet things that the original diagnosis was wrong because if it was a brain tumor, Georgia should have died by now. Momma just thinks that the homeopathic vet is doing such a good job. At any rate, Georgia is getting older and she can do less and less but she still seems ever so content to snooze on the bed and she loves to eat!