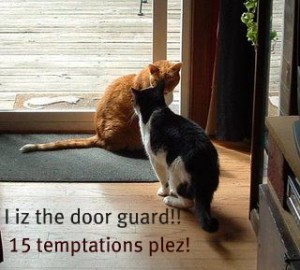 Well this was a bit of an easier Find Chey (as always when the male sends a photo!). At any rate, Skeeter, LC and Ayla were the first kitties here to guess correctly:

You are at the Petronas Towers, Kuala Lampur, Malaysia.

Congratulations on the journey!

However, Gandalf and Grayson noticed:

Actually, it is Kuala Lumpur, not Lampur… sheesh. And they used to be the world’s tallest buildings, before being surpassed by the Taipei 101 where Adan and Lego live in Taiwan. See how smart the Cat Blogosphere has made us kitties?!

Eric and Flynn, Mickey, Miles, Sammy and Billy, Milo, Siena, Ping, Laila and Minchie and Derby all knew where I was too. So there were a lot of very brilliant cats in the blogosphere.

Perhaps turkey makes us smarter? In which case, I think all cats need to eat more turkey.

Is that the chimneys from your turkey oven working overtime on Thanksgiving? FAZ

No but I WISH I had that much turkey!

Um and as to that rumor that I’ll be the next New York Senator, it’s only that, a rumor. I mean I have to actually live in New York for awhile to establish residency. As the last time I visited New York I became a Borg I am a little hesitant…

And we are purring hard for Misty who we just found out had emergency surgery.   And we hope that Snap gets better and for all the kitties who are in difficulties.