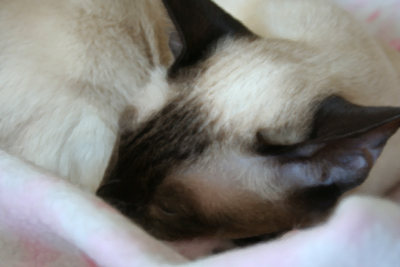 Meezer Rule for the Week: Be helpful wherever and however you can.

Candidate Cheysuli has rushed to Washington to help iron the details of any future financial bailout. The candidate waited until this week to rush off because she was napping through the original financial melt down.

“Actually,” stated Cheysuli, “I was required to be with my family as the Woman was having a financial meltdown thinking that WAMU actually collapsed. She is still thinking that this is a bad thing as she is certain that JP Morgan Chase will require higher fees from her small business account.”

Currently Cheysuli is napping on Maria Cantwell’s lap. Cantwell represents the candidate’s home state of Washington and sits on the Senate Finance Committee. When Cantwell gets up, Cheysuli goes and snoozes on Ron Wyden’s lap.

“She’s been such a great help. You know how chilly it can get in the Senate Chambers as we sit there discussing the issues. Having her on my lap is like having a blanket wrapped around my legs, but so much more environmentally friendly,” stated Cantwell.

“I’m certain that any progress that is made from this point forward,” said one unconfirmed source, “Will all be due to Cheysuli’s involvement. She’s such a uniter. Republicans and Democrats alike just want to rub her ears!”