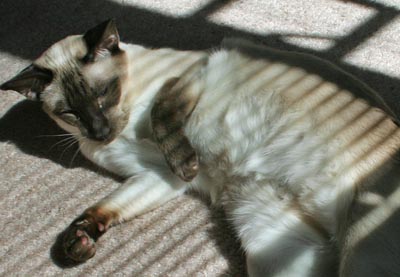 “We have many, many very serious problems with voting. We no longer have the ability to track every vote. Voting machines are not accountable to the people!”

Cheysuli took exception to the concept that cats not voting would not be a serious problem. “Who do you think will vote for me if cats can’t vote?! If I can’t vote, how can I get anything done as president?!”

Friedman refused to continue the interview citing work to do on his blog bringing information out to how voters can make sure they get their full constitutional right to vote.

“I want all cats to know, if they have their voter card, they have the right to vote. They should be on the rolls. Call your officials if humans try to turn them away at the polls.

“If your state, like mine, doesn’t allow feline voting, then start your own grass roots organization. Make them listen to us. Thousands of cats having a nap in in front of the courthouses of the US should take a long way to getting what we want. We are cats! We get what we want,” returned Cheysuli.