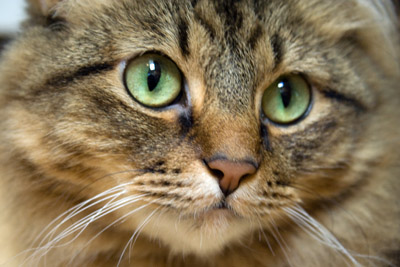 Well Tuesday night all our food will be taken away because Cheysuli has to fast after midnight. They also want us to remove all water about two hours before she has to be in, which will be hard for Georgia because Georgia likes her water. Of course they could lock Cheysuli up or something. I would like that.

She will have her teeth done on Wednesday. I will like to see how she gets a rule from that.

We had a big old thunderstorm here on July 2. Then on the fourth there were more noises, even though fireworks are not allowed in the city. Momma said that was a good thing because imagine how loud they would be if they were! (um yeah that was sarcastic as there were fireworks within city limits). I do not like loud noises but Cheysuli is never bothered by them and Georgia doesn’t hear well enough to notice.

Anyway Ping and his family are starting to feel better so I am very happy about that. Even though I think Momma got a little too close up on this close up–don’t you think?