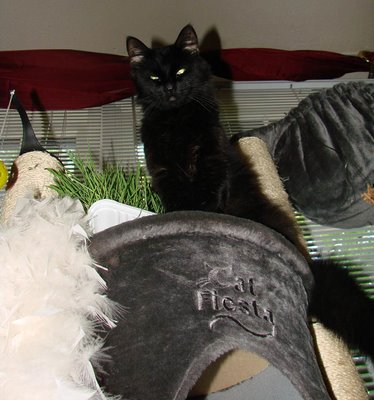 Pepi, however, got it correct! Way to go Pepi!

I came to find you Chey, since you asked. You must be lost again. Isn’t there one of those liberty things near you? Yeah, I’ve heard of it. Darn, where’s my thinking cap? I think I’ve lost it. Oh there it is! That park with a beach. Alki Beach. Yeah, that’s it. Makes me think of Alki-holics. Did France give yall that Liberty statue too? Or did you get it at a thrift store? Well, it’s purrtier with your face on it, anyways.
Purrrrrrrrrrs,
your bud Pepi

You know I did not meet any Alki-holics there. But it was a lovely beach on the west side of Seattle. They have their own little Statue of Liberty there too. I didn’t have to go far this weekend, but what with gas prices can anyone blame me?

The Taylor Cats also got the correct answer! Good for them! I have to admit that I never discussed any excursions out to the sandbox that is Alki with them either!

This week was a hard one–but I’ve had some easier ones so you’ll have to forgive me for being sneaky! It seemed such an appropriate post for the fourth though!