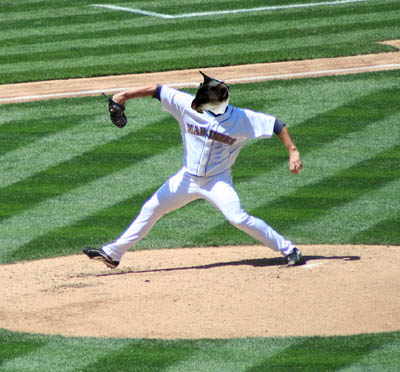 Southpaw Candidate Cheysuli was honored to toss out the first pitch in the Mariners game against the Indians on Saturday. Sadly, Cheysuli had some of the best pitching seen in the game by her hometown Mariners and the visiting Cleveland Indians won 9 to 6.

An unnamed source said the Mariners were scouting her in case she looses the election. She has some rare talent that they would like to tap.

In other news, the Candidate is experimenting with a new litter box. On Friday, Tidy Cat delivered the Breeze Litter Box system to her home. While most people get a lovely pale green color, Cheysuli had hers done in red white and blue, with her Winds of Cheynge logo on the side.

Unfortunately, Cheynge is not happening at their house and the litter box sits unused, although everyone has sniffed at it. Next up will be trading places with the Tidy Cat and the current litter box.