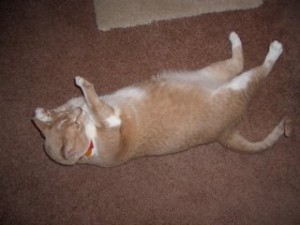 Well I was surprised that this was not a more famous site.   Derby got it.  I was in Kew Gardens. I had hoped it was famous enough that someone could tell me the name of that building but Derby couldn’t!

Ok mum is tired. If she told your beans to go there, and it is a big place, so maybe she didn’t see all of it. Are you hanging out in Kew Gardens? Looking like the prettiest of the flowers?

Mum says she is brain dead and needs sleep.

And alas my human is not smart enough to know.  I was rescued by a little Welsh Cobb named Phillipa and she was the finest of girls pulling a little cart where I sprawled out until she told me it was time to teleport home.

Sam, Sabrina and Simon were also right, but not as specific. They said I was in a botanical garden, which describes Kew Gardens.

The Meezers say I am in their backyard.   I thought they lived in the states though, but I can understand how this might look like their backyard.  Where, Miles, exactly was the Borg ship that assimilated us?

Mickey and Alexi apparently summer with the Meezers.  Mickey described his summer cottage. Alexi said it was his summer hut (Miles, Sammy and Billy you apparently live in a hut?!)

And Meezers, I would watch what sort of signals you send out. I believe Skeeter, LC and Ayla have figured out why the Borg are always in your backyard:

While I don’t recognize the building in question directly, the pattern of the the shades in the windows is standard Klingon reverse-analog signal code for “Captain Picard’s house in France is very ugly and his wine is even unfit for those drunken Andorian peasants”.

So for all of you who never know where I am, not to worry.   We are interspersing some of these harder ones with other easier ones and eventually I’ll end up some place you do recognize!  And don’t hesitate to make something up.