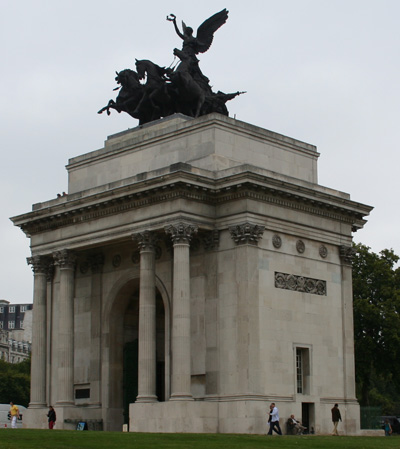 So you wanted to know where I was? Well here it is.Â  I was in London looking down from the top of the Wellington Arch.

Derby was the most correct cat when he said

I see you on the right, donâ€™t get trampled by the horsies. I know your beans were in London, it it some statue in London, with you making it pretty.

He was also the most logical (and flattering!)

We quite liked Daisy’s response as well

Itâ€™s the start of the Kentucky Derby! Run, Chey, run!

And so I am busy running and running.Â  We were very sad about the horse who fell and had to be put down at the derby.Â  We hope Derby’s Derby Day was better for him!

Sam, Sabrina and Simon also thought we were at the derby, but they did not say it quite as colorfully as Daisy!

We were surprised at the number of people who all thought Dragonheart and Merlin were right.Â  We have never been there, but I might have to wander over!Â  And because so many people liked his answer, we thought we had to acknowledge that it was a very good guess!

So congratulations to Derby (and what a week for him to be a winner!) and Daisy and Sam, Sabrina, Simon and Dragonheart and Merlin!