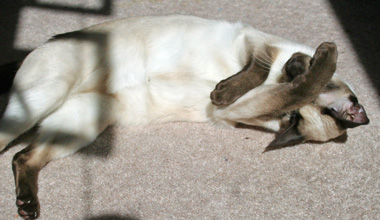 It was refreshing to see my humans working their hands to the bone, cleaning up the fine mess we all made of the house. They just could not understand how it happened. I should like to thank all of you for your help!

I was pleased that we got a bit of record-breaking late snow–here and in La Conner about an hour north. Yes, at the end of April, snow landed on the tulips. Sadly, the Woman noted that a lot of the little specialty shops in town were going out of business, including Good Kitty Bad Kitty, which was a favorite of hers. Of course, we all know which cat I am.

At any rate, I made out well as she purchased a bunch of stuff from them and got it at 50% off. She shouldn’t be spending money, but how can you pass up such a sale?

They drove up the Valley along the Skagit River and had pizza in Concrete. No, not bad pizza, but pizza in the town of Concrete. A lovely place that we are constantly hoping Stephen King will set a novel. They did find that Sedro Woolley was only about an hour from Mt. Baker Ski Area, which is a bit closer than Bellingham. This means that the north eastern part of Mt. Vernon isn’t much farther, which puts it in the running for a retirement area.

I firmly believe I belong at Mt. Vernon, although I thought it was on the east coast?