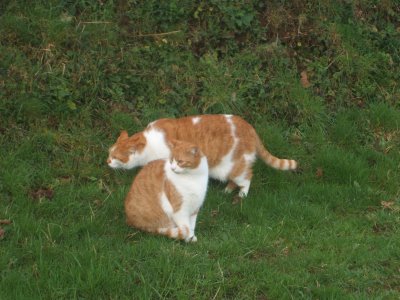 I have to admit most comments were on the woman’s book and as I am so not into that book, well they were not as intriguing as they could have been. I should monitor the subjects better. In fact, that book, if it looked good, wasn’t. It ended up being a sort of sales pitch for the author’s subliminal tapes. The sad thing is, is that everything he said up to the point where the last two chapters were just a bunch of testimonials to the effectiveness of the tapes had the Woman interested. However, the last two chapters really irritated her.

But I allow her to digress. Our most intriguing comment today was from Eric and Flynn who said:

That is a lovely pikchur Chey. Mum sez it reminds her of a painting she likes of three horses heads. She canâ€™t amember what itâ€™s called. Mebbe the Three Champions or sumfing like that. We told her sheâ€™s silly cuz efurryone knows your not a horse.

They are right. I am not a horse. Nor do I have three heads. However, horses are magnificent creatures of great majesty as am I, so perhaps that was the confusion…?! And of course, brilliant as I am, I perhaps astound her with my intelligence making her believe I have three heads.

So there you have it. Eric and Flynn–and again a lovely kudos to Zoolatry for it is does remind them of a famous painting, then it is their doing!