Hide Search
You are here: Home / The Latest With Chey / Tabby Tuesday Reports 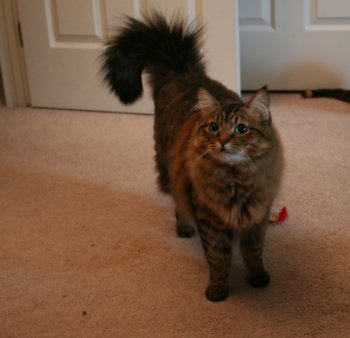 First I want to think Karen Jo for her great limerick about ME!!! Then I have to tell you about my furry exciting day yesterday. Jack Bauer came to rescue Cheysuli. Well Momma didn’t want to go and Cheysuli refused to go without her. So Momma and Jack had words. Lots of them are words that I can’t repeat on a “g” rated blog. Probably not even PG. Momma DOES NOT like Jack Bauer. Anyway, after Jack threatened to shoot her and kill her if she wouldn’t let him save her life, Jack knocked her out and carried her out of the room.

Cheysuli put in a call to someone named Tony, who was supposed to be dead. She told him that she had a situation and that someone had sent Jack Bauer because there had been a threat on her life.

They talked for a moment and then Jack came back to rescue her too! He carried her out and then they were gone! Georgia and I had been left behind!!!! I was so mad at her. I hid in the closet. Georgia didn’t notice that anything had happened.

Then they came back with a large heavyset guy that I’m sure I’ve seen on television. He said something about having things taken care of and the threat had been neutralized.

“Thank heavens. I hope it was soon enough that the Woman hasn’t had time to injure Jack Bauer too seriously. She really dislikes him.”

“Want me to fix that too?” the guy said.

“Nah. I love to have things annoy the Woman!”

“I just love those kits of yours, Chey,” he said, leaving.

I know I’ve seen him, but I can’t remember where… hmm…