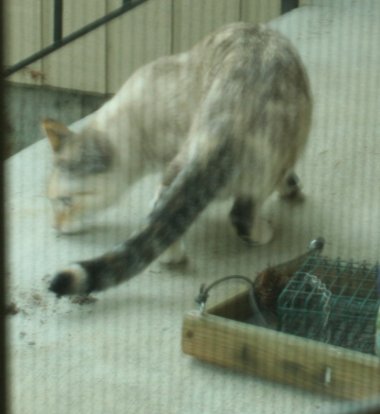 After a distressing weekend, worried about Daisy, I think we may have found the culprit.Â Â  She was lurking outside my house this time, no doubt adding in some listening devices and perhaps even some video. Who knows what might be out there on the internet about me?!

I called my people and the LVPD were notified. Â  Her DNA matches, although she doesn’t look much like a meezer.Â  She has confessed to claiming to be my kitten (HUMPH!) and that she has never met Tony Soprano. Â  (Certainly he has far better taste, not that I would know). Â  She has also confessed to whapping the reporter because she was about to be found out.

Fortunately Daisy can now take off those platform shoes and she was not forced to wear a mullet wig.

I think it wasÂ  a fellow candidate.Â  No doubt it was Mrs. Clinton.Â  She was devastated when I refused to have her as my running mate. It would be just like her to sabotage me like this.

Oh and Sammy–thanks for taking care of the problem.Â  She wouldn’t have come forward without your suggestion. You know what I mean–wink wink nudge nudge.

This lovely girl is actually very shy and won’t let the Woman close to her at all.Â  I believe theÂ  neighbors are feeding her.Â  She wouldn’t let the woman near but was quite curious about where she disappeared to!