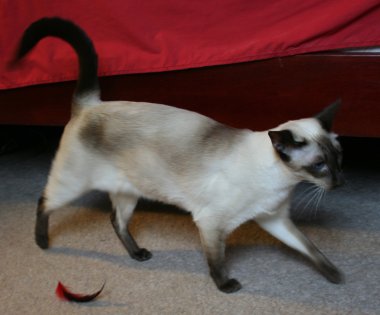 Well, it’s been a long weekend. Eric and Flynn have headed home to their humans. It was fun showing them around the States. Grand cats.

I am also working on writing up legislation to allow Feline Queens to have a say in where their kittens go. Of course, there was that speculation that my kittens may have been adopted by Tony Soprano. There were several difficulties. First, the kitten in question was a lilac. Now I’ve been known to throw a lilac, but we all know that in early life these Siamese are particularly easily influenced. Further, no one has been able to find her since.

Now, had I had any say in who took my kittens, I could respond to these rumors with much more information than I can now. Certainly at the time they were taken from me, I had no say in where they went. I had no mob ties. I have no idea why Tony Soprano would have wanted one of my kittens. Certainly if I had known at the time that criminals were looking at my kits, I should never have let them out of my sight and perhaps run away with them. I was not, however, introduced to anyone or consulted and the line of people who came through… well! You know what a beauty I am–can you imagine the demand? Further, many of my kits were taken off to a show and never returned to me! Sniff.

Finally, I do not know how this could have been written. My kittens were not fictional. Tony Soprano IS. I am not quite certain how they came to be in the same universe?

As for the Borg thing–anyone could be assimilated. In fact, Dennis Kucinich and I were with Shirley MacLaine that time he saw the UFO. I am certain it was the Borg. They would have taken him as well, but I think they’re a little afraid of what would happen if they have to assimilate Shirley.