Hide Search
You are here: Home / The Latest With Chey / Feature Friday: Cheysuli Linked to Mob 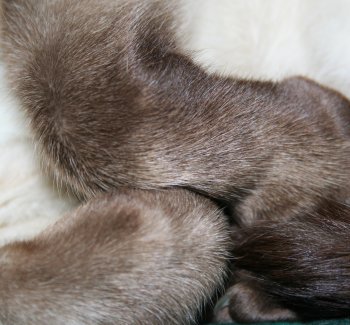 Presidential Candidate Cheysuli has ties to mob boss Tony Soprano. Reporters uncovered information that several of her kittens had been sold to the Soprano household at various times in the past. As no Siamese cats have been found, it is thought that they were purchased as pay off gifts.

While rumors have abounded for years, until now there have been no substantiated reports. One kitten escaped and told the tail.

Those closest to Cheysuli state: “It’s unlikely that this kitten is actually one of hers. First, Tony Soprano is a fictional character and therefore could not purchase this kitten. Second, if we did have ties to Tony Soprano, do you really think Rush Limbaugh would still be around insulting the troops?”

“It’s typical spin,” stated Limbaugh in a rebuttal. “After all, everyone knows that Tony Soprano would never touch me. I know how to get to him.”

Cheysuli herself was not available for comment. The popular beleaguered candidate has fought reports of being assimilated by the Borg and now has to contend with rumors of Mob ties.

Most intriguing comment will be the cat featured first in Weekend Cat Blogging hosted HERE this weekend! Also posts that you want to submit can go in the comments on this post, tomorrows photo hunt post or Sunday’s post. We will be putting up the weekend cat blogging post on Sunday and will add to it throughout the day. I’ll try and keep this message on Saturday’s post as well!