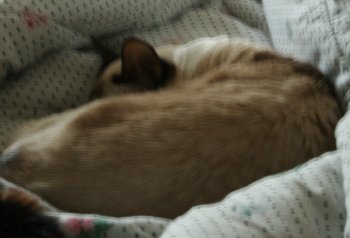 Beleaguered Presidential Candidate Cheysuli has been hospitalized. The four and half year old Siamese was hospitalized late last night after over indulging in turkey and trimmings.

“She is stable, but sleepy,” said the on call resident.

It seems Cheysuli got into the turkey and began eating. It started with one small piece given to her by the male servant she employs and went down hill from there. Apparently there are no leftovers in her household.

“She’s bloated and gassy,” stated the same resident, “But like most people who over indulge in Thanksgiving, she should get better. In fact, as she came to last time, she was asking for Pumpin Pie.”

I hope everyone enjoyed their Thursday, whether or not they are some place to celebrate our uniquely American Stuff Yourself in Thanksgiving Holiday. Remember today is Feature Friday. Most intriguing comment gets Feature on My Sunday Guest Star! You guys give the most interesting comments! Keep up the good work!