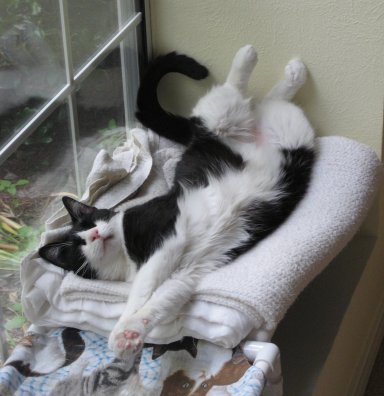 I have to admit that there’s never been a harder decision for the Guest Star.Â  Usually it comes down to two or three cats. This time I think every single comment could have qualified as the guest star.

I’ll move quickly through the best of the best:

And you know who wasn’t mentioned? Yes, Forty Paws.Â  They have certainly come up with a great comment.Â  We laughed. Miles and Sammy’s human laughed.Â  They even had to re-comment on it the laughed so hard.

Well, perhaps you need to ensure Gemini and Georgia are state governors in highly populated states so that if the populace of said states are too old to understand butterfly ballots and leave their chads hanging, then the Supreme Court can be called in because the recount is too close to call and by then no one will have remembered that you were ever assimilated as a Borg in the first place, or really care, and if your Daddy paid for your education at an Ivy League school and you brag about your low grades then youâ€™ll fly into office on those slippery shoe strings of greenback laced influential friends of POTUS who own multi-national companies of questionable ethics who need a war to earn billions of dollars in government contracts to do absolutely nothing. Oh, wait a minute. Those arenâ€™t your campaign positions anyway. Nevermind.

So I think they need to really really be proud of themselves for standing head and shoulders above the crowd with a thoughtful, intriguing comment when I was pretty much intrigued by everyone!