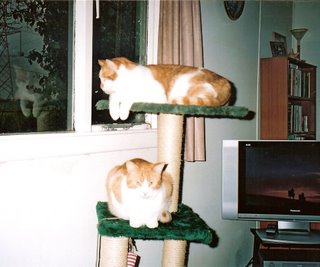 Well, I had a few really good comments and once again it was hard to decide. I’m sort of deciding off topic a little because it’s going to go to Eric and Flynn.

Their topic allows me to announce although they were to go to prison for three weeks while their humans went on holiday, I was able to pull some strings and get them to stay here in the US and avoid the prison sentence. I am require to escort them everywhere, so anyone who wants them to come over and visit, let me know.

We just wantid to say weâ€™re so furry excited that yer going to try and git asylum furr us. Weâ€™re going to be asylum seekers Yayyy!!!

So that said, we will be teleporting around this week. Let us know if you’d like a visit!