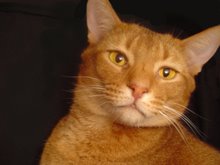 Everyone was so nice to Gemini.Â Â  We had a hard time deciding!Â  The Woman is a bit late writing this. She is actually around today.Â Â  While she does yoga seminars, this was not one of them.Â  She does long day hikes that should make her sore, but that doesn’t wipe her out the same day.Â Â  She whines the first day on the slopes when her quads ache, but this was not what she did.Â  No.Â  She was at a Sufi seminar and all they did was sit.Â Â  She is convinced that the North Seattle Community College has a contract with Guantanamo to use their old chairs.Â Â  She can hardly move her back her is sore!

At any rate, I moved over to the rebuttal snafu post because I liked what RamsesÂ  said:

The word rebuttal makes me fink that someoneâ€™s getting a new butt!

Maybe thatâ€™s what we all need after the vetâ€™s taken our temperature using the booty method!

It is this comment that Ramses our Sunday Guest Star.Â  You know, it occurred to my human that she might be misspelling because she wasn’t sure about the two t’s. Â  But no that was correct.Â  I think that Ramses may be on to something about this word.Â  I wonder what the etimology is?

Therefore, for the creative meaning of rebuttal, the Guest Star goes to Ramses!