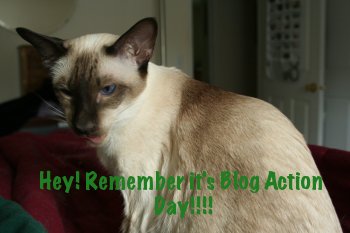 Well it’s blog action day. As a good active Meezer, I will be writing a short post about the environment.

We know there is much to do. We see it in our daily lives. We hear it on the news–even when they are trying to say that there is no climate change. It’s there. We do need to change. We often are waiting to see just how we need to change.

What have we done right? Well, a large troop of endangered monkeys was found in Vietnam. A rare tiger was found in the south of China.

It may not sound like much, but consider how much we AREN’T doing. If we manage to find good stories of surprises and what comes back, think of what we could if we made changes?

While we have impacted the earth on a much larger scale, I know the earth can come back. We lived in the shadow of Mt. St. Helen’s for years. Watching the park come back after the eruption was a fascinating lesson in how tenacious life can be. Let’s make the changes so that our world can look more like a 25 years later shot on St. Helen’s rather than a just after.

Happy Meezer Monday to all as well!