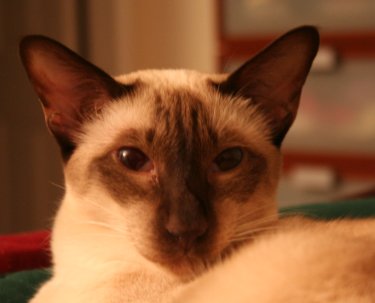 Will having been Borg hurt Cheysuli’s Presidential Candidacy? It’s too soon to tell. The story broke online on Tuesday evening. Early reports had her being assimilated on the East Coast during a visit with friends. Initially, it was thought that Eric and Flynn, here because of asylum due to pending imprisonment in their country, were assimilating Cheysuli into their culture.

By Wednesday, the photos were everywhere. We were unable to get commentary from Admiral Picard. Seven of Nine stated that it was quite an interesting choice for assimilation. She had, however, suspected that cats were smarter than humans.

Emergency Borg implant removal specialists were sent to the Seattle area to take care of the problem. Cheysuli is in good condition.

Will this hurt her presidency? Experts are torn.

“On the one hand there is the sympathy factor. I mean anyone could get assimilated. As friend Miles said during his apology, it DOES happen sometimes. Cheysuli’s assimilation was quickly caught and the implants were removed.

“On the other hand, there is a lot of prejudice against the Borg and all things Borg. By having associated herself with being Borg, Cheysuli could loose potential votes,” stated one savvy political commentator.

“Are you kidding? It can only help. Look at the American people right now. They are dying to be told what to think. They act more like sheep (sorry sheep) than humans. They want someone else at the helm. In fact, I think the Borg have never been more popular and less scary. It can only help,” stated one cynical Star Trek fan.

And remember, it’s Feature Friday. Â  Most intriguing comment becomes my guest on Sunday!Â  This is the second to last week of not being able to do much visiting on Friday.Â  The woman has one more day of covering for the other acupuncturist and then next week she goes to a seminar which she is looking forward to!Â  Then back to my usual snooper-visiting self on Fridays as well!