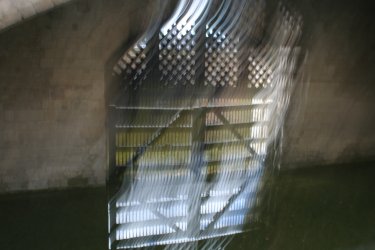 Well, there were lots of thoughts. I would like to commend those who noticed that I was peaking out of Platform 9 3/4 from my original London photo. I did not meet Harry, although I met someone far more interesting (and in my opinion important.). I got to meet Crookshanks. He’s a delightful fellow. Had a lot to say as well. I’ve really got the inside scoop on Hermione but I promised not to share.

At any rate, yesterday several of you asked about what meezing was. It’s a meezer sound we make to our humans. It’s not the loud cry you think of, but rather the meeze. Latte described it far far better than I can.

I’d like to remind everyone that Sunday Guest Star is back up and running as usual. The cat whose comment intrigues me the most will be featured on Sunday! Of course, this photo was an interestingly ruined one my human took. She was shooting the traitors gate but the gate area itself was darker than she expected and so there was a greater than expected lag for the exposure.Â  She moved a bit and now it looks like all the ghostly traitors are moving through… perhaps that’s what she captured and it wasn’t camera operator error at all. She’d like to think so.