Hide Search
You are here: Home / The Latest With Chey / Farewell Friday 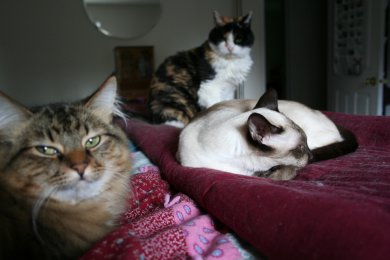 Well this is my farewell post. Oh I know it’s not forever. It’s 10 days until the humans come back after they leave (Saturday) and then one because she thinks she’ll be too busy to blog (?!) and one because she thinks she’ll need to rest (?). She appears to think London and Seattle are a long ways away from each other. I’ve tried explaining that I talk to our British cat friends regularly and it’s no problem, except sometimes Fat Eric has to arrange his party schedule while his humans are up and the computer is on.

Sniff. Party at our house starting on Sunday. No humans. HE HE HE…

I AM IN CHARGE! Alas I don’t have opposable thumbs. Just brains. HE HE HE…

I met the pet sitter. Nice enough woman. I’m sure she won’t notice if we all hide in the closets while she’s here to feed and pet us. It’ll just be more treats for us. I don’t know why the woman didn’t make her blog for me. Like how hard would that be? All she has to do is turn on the system. I do the rest.

At any rate, I’ll miss all of you that I won’t get to visit daily. I’ll get around today but probably not much tomorrow. Sigh. Be well. I expect that there will be NO MORE LOSSES while I am out of commission. Got that everyone? You BETTER stay safe and healthy. That’s an order, got that? I’ll be very disappointed in anyone who doesn’t obey. I AM TIRED OF BAD NEWS. I want to come back to only good news–like Latte had a really wild party (probably at my place).

Ping, the photo of Gemini is for you. I thought it should have just been a pose by moi, but the Woman was feeling like I needed to get used to sharing. Yeah right whatever. 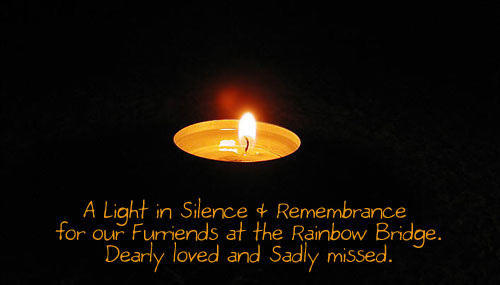 While we won’t be able to put up our candle this weekend, we have it here.

Our thoughts and purrs are with those who have lost.

I raise my sparkling water fountain in toast to the remembrance of those who have gone before and to better days for those of us left behind.