Hide Search
You are here: Home / The Latest With Chey / My Seattle Fireside Chat 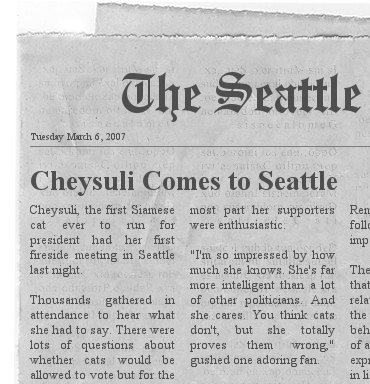 The other day I had my Seattle fireside chat. It went well. IÂ  had quite the crowd.Â Â  In fact,we almost had to find a new place to meet there were so many people.Â  Still many stood just outside the door and leaned in to hear. Fortunately it was a surprisingly nice evening.Â Â  It’s been raining so much here that we could only conclude it was the universe smiling upon my campaign.

Certainly there was much talk about the issue of feline voting rights. We discussed far more important issues, such as why criticizing the war is not supporting the troops but it’s okay to leave them in Walter Reed.Â  Â  We also discussed Scooter Libby’s conviction and the fact that we are being led by men who many people believe to have committed treason. Â  I was able to stand up and say that this is the reason I am running for president.Â  The humans have made such a mess they need a cat to clear it up!!!!

The crowd was able to stay on target and ask good questions.Â  Of course, as a federal level candidate, I was able to dodge the issue of the Alaskan Way Viaduct. Â  While I don’t envy anyone this decision, for heaven’s sake–stop waiting for another earthquake to tear the thing down for you!!! Make a decision already!!!!!!